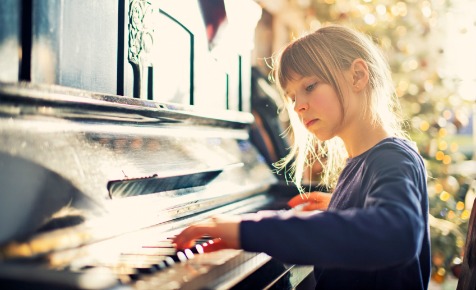 Music training not only helps children develop fine motor skills, but aids emotional and behavioral maturation as well, according to a new study, one of the largest to investigate the effects of playing an instrument on brain development.

Using a database produced by the National Institutes of Health Magnetic Resonance (MRI) Study of Normal Brain Development, researchers at the University of Vermont College of Medicine analyzed the brain scans of 232 healthy children ages six to 18 specifically looking at brain development in children who play a musical instrument. (The original study did not indicate specific instruments.)

"What we found was the more a child trained on an instrument," said James Hudziak, a professor of psychiatry at the University of Vermont and director of the Vermont Center for Children, Youth and Families, "it accelerated cortical organization in attention skill, anxiety management and emotional control."

The cortex, or outer layer of brain, changes in thickness as a child grows and develops. Previously, Hudziak and colleagues Matthew Albaugh and Eileen Crehan found relationships between cortical thickening and thinning in various areas of the brain responsible for depression, aggression and attention problems. This research, announced last month in the Journal of the American Academy of Child & Adolescent Psychiatry, was different.

"I wanted to look at positive things, what we believe benefits child development," Hudziak said. "What I was surprised by was the emotional regulatory regions. Everyone in our culture knows if I lift 5-pound, 10-pound, 15-pound weights, my biceps will get bigger. The same is true for the brain. We shouldn't be surprised we can train the brain.”

Because the study's participants were all mentally healthy children, Hudziak thinks the positive effect of music training on those who are not could be significant.

"A kid may still have ADHD", he said, "It's the storm around it that improves".

Inspired by his own research, and having never learned to play an instrument, the 56-year-old Hudziak decided to take viola lessons last year.

"I had this passion for health promotion in children, it seemed silly not to do it myself," he said.

Though music isn't his only health-related extracurricular activity — Hudziak also engages in regular exercise and meditation — he believes the viola lessons  contribute to his overall wellness. They have not, however, contributed much to his overall playing ability — at least not yet. The sanguine psychiatrist had just one word for his viola skills: